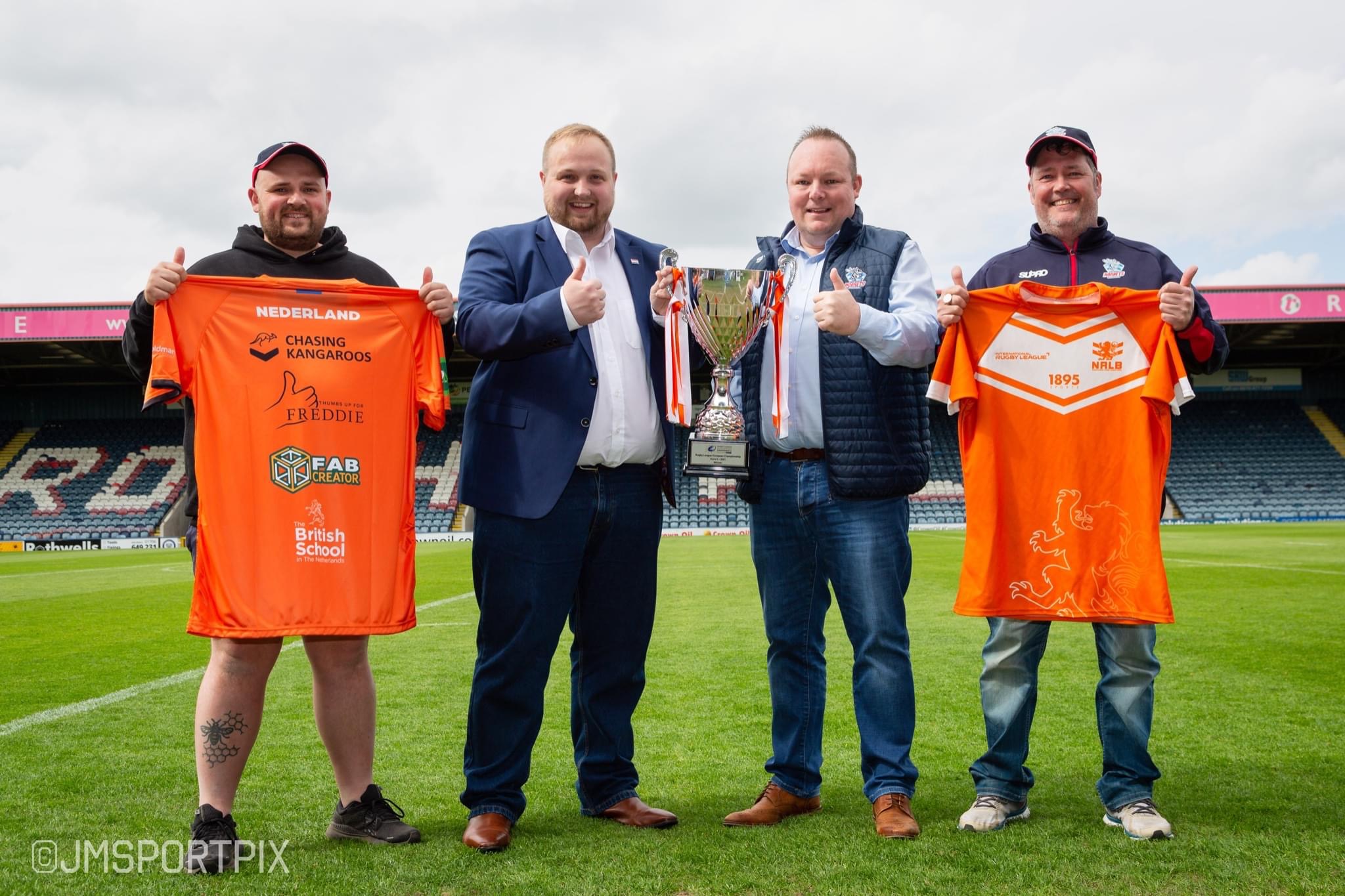 Rochdale Hornets were fortunate enough to be paid a visit by Netherlands Rugby League, at Saturday’s 46-28 win over Doncaster.

The Orange Lions’ visit marked another stop on their trophy tour, following their European Rugby League victory back in October.

Kane Krlic’s side took home the Euro D trophy after a 36-10 win over Czech Republic, which included a fine hat-trick for centre Joran Schoenmaker.

The win marks one of the shining moments in their short, but eventful, history.

Founded in 2003, Netherlands lost their first ever game in a narrow 18-22 defeat to Scotland but would register a historic first win when they welcomed Serbia to Rotterdam – in the following fixture.

Since then progress has been steady, but the recent cup final win marked a ninth consecutive win and the signs of development are clear to see.

A key figure in this development has been the Operations Manager – Matt Rigby.

Rigby joined the NRLB back in 2016, as an assistant coach, and is a keen Hornets supporter.

Having grown up in the borough, he attended Hopwood Hall College which is currently home to Hornets’ Ben Metcalfe and Scott Parnaby.

Local clubs Littleborough, and Saddleworth Rangers, are amongst some of the clubs Rigby represented before he crossed the channel to go and play for Den Haag Knights.

He has since taken a sabbatical from playing in order to devote all his attention to developing the sport, in the Netherlands.

His affiliation with Rochdale has also been continued by featuring the “Thumbs up for Freddie” logo on the Netherlands’ training shirt.

Thumbs up for Freddie is a tribute to Freddie Lowe – a young Hornets fan who tragically lost his life to cancer.

His father, Chris, has since raised over £3500 for the Royal Manchester Children’s Hospital – a truly inspiring feat which will provide vital funds to their critical care units.

The collaboration between the two is a truly remarkable example of how the work done by the rugby league community can be felt far and wide.

We are incredibly grateful to Rigby, and the NRLB, for recognising Chris’ outstanding efforts and we hope it can be part of a long, happy partnership between the two teams moving forward.

TICKETS for the 2022 Internationals will go on sale soon!