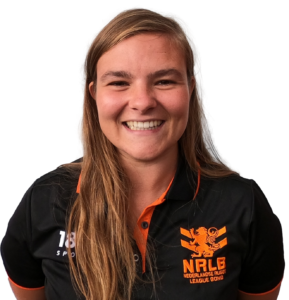 My name is Stephanie van Diepen, I am 26 years old. In 2019 I joined the board, first as a Secretary, but when the position became vacant I got voted in for the function of Treasurer. I got introduced to Rugby League by a friend I met whilst travelling Slovenia in 2016; I accompanied him to a training and became enticed straight away. I am proud to be a part of the NRLB, and a co-founder of the Zwolle Wolves through which I hope to expand Rugby League further in the eastern regions of the Netherlands.